Why the Supra is the finalist, and the BMW isn’t? 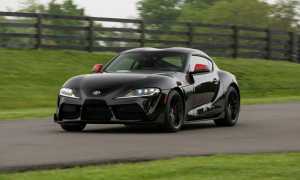 The Toyota Supra’s is an iconic sports car, but it hasn’t been sold in the U.S since the late ’90s. For 2020, through a partnership with BMW, the Supra is back. The 2020 Toyota Supra is built from BMW parts in the same Austrian factory as the BMW Z4.

Toyota revives the legendary Supra name and its brilliant performance. The 2020Toyoyta Supra employs a turbocharged, 3.0-liter, inline six-cylinder engine that will be attached to an eight-speed automatic transmission. Motorists will be able to turn the power plant’s 335 horsepower and 365 pound-feet of torque into an electrically limited top speed of 155 miles per hour. 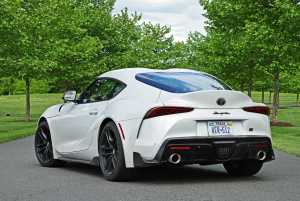 All Supra models with an eight-speed automatic are offered only with rear-wheel drive. The Supra laid down zero to 60 mph in 3.8 seconds and zero to 100 mph in only 9.5 seconds.

You can feel when the front tired begin to lose track through the feedback-rich steering. The involving driving experience carriers over to the street as the suspension provides constant updates as the road surface changes.

The driver-focused cockpit is tight, and although the double roof provides some additional headroom, the tallest drivers will feel pinched. The standard touchscreen infotainment system features a 6.5-inch display, but a larger 8.8-inch display with navigation and Apple CarPlay capability is available. A 12-speaker JBL audio system is optional on the base Supra. 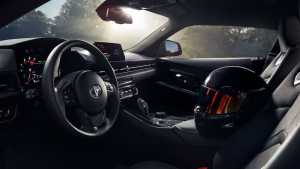 If you like to sit high, you’ll have to sit lower wearing a helmet to avoid bumping against the roof.

It’s the fact that Toyota has been able to take the same mechanicals as BMW and shape them into a proper sports car, that’s perhaps the most impressive aspect of the Supra.
The Supra offers slightly more extended powertrain coverage but falls behind the BMW with a shorter limited warranty and complimentary scheduled maintenance plan.
Generally, the Supra pricing was about $8,000 to $13,000 below a comparable Z4 caught the notice. Supra drew more gas station attention than pricier cars filling up beside it. The Supra is better looking than the Z4, no doubt about it.

The new Supra is much more of an all-around performer.