A new and better MBUX has debuted, comes with “Hey Mercedes” voice command…

Last week, we covered two German Automotive giants; BMW and Audi. How could we possibly forget the third corporate rivals of the above two? Mercedes. Let’s see what Mercedes has been doing this past week, be it noisy or silent. Get it??? Let’s jump right in… Its 2020 and Mercedes have already brought up an interface update for the upcoming cars and the one existing. The updated system will be starring the 2021 Mercedes S-Class to debut with. In S-class,  passengers in the rear benefit from the same extensive infotainment and comfort feature as those in the front. Hence the rear seat occupants can access three touchscreens and various many options for example the MBUX Interior Assist or the voice control assistant “Hey Mercedes”. 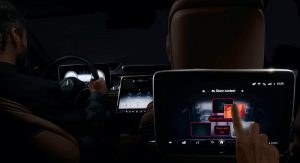 Thus the S-class will be premiering with five screen setup inside and  27 fewer hard keys than in the outgoing model, all thanks to the updated MBUX Infotainment system. The designers proceeded with the core idea of personalization and intuitive operation becoming far more extensive. A new 3D driver display allows a spatial view at the touch of a button for the first time, thus a 3D view is achieved without the need for 3D glasses.

The voice command has a better intuitive reach and a better user-interface. A new improved voice assistant “Hey Mercedes” now capably decodes a wider range of commands. Some actions like accepting a call or opening navigation don’t require PIN anymore. The assistant can also explain where the first-aid kit is located, or how to connect a smartphone via Bluetooth. The second generation of the MBUX interface offers a new authentication method besides the classic entry of a PIN. It combines fingerprint, face and voice recognition, allowing access to individual settings or verification of digital payments from the vehicle. It also capable of networking with vehicle systems and sensors data.

Rishabh Chugh
An automobile engineer by profession, writer by heart.
Previous articleLiving Abroad Release Date, Cast, Plot, Review, And All You Need To Know!!
Next articlePractical, Passenger-Friendly SUVs That Are Gas Friendly – 2020