The end seems near for the Frankfurt Auto Show

Things have been messed up for the Frankfurt Auto Show. It is nearly doomed for its future, and it can be assumed. We cannot get to any better conclusion after we observed a decrease in the number of visitors this year, and that too went down to one-third of the approximately usual numbers.

Things didn’t seem reasonable even before the start of the event. Everything seemed hard and silent. The buzz from the public was grim, of course, when the competition got for the people.

We didn’t see the brands such as Toyota, Renault, Peugeot, Nissan, Fiat, and Ferrari. These all were a severe blow for the organizer team . the VDA, Germany’s auto industry association, was under stress. To add fuel to the matters and to worsen the conditions, we found climate activists, thousands in number, before the entrance of the show, protesting, and highlighting the simmering tension that exists between the German car industry and the Country’s environmentalists. 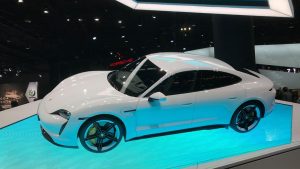 The demonstration of the Automakers regarding their growing commitment to decarbonize their fleet and the upcoming of the new electric models such as Porsche Taycan, Opel Corsa -e and Volkswagen ID3, seemed to be a failure and got no Excited responses from the visitors. According to the VDA, this year, the show was attended by 560000 people, and if compared with the 810000, the biennial event in 2017 and the talks were effected by the Diesel crisis and driving Bans in polluted city centers.

There had been earlier discussions about the attendance as it had felt from 2015, and 2015 had the best till in eight years.

The Auto shows from Detroit to Paris are suffering declination due to the focus of car companies on their marketing efforts on the live-streamed, standalone products. But in case of Frankfurt, it was the global climate strike led by Sweden young activist Greta Thunberg . on referring to the declined numbers of visitors, Opel CEO Karl Thomas exclaimed that these years show had been a right failure and a dark show of what it earlier was and the new upcoming events.

Furious Mad
Madhav Kumar is a student at BIT Sindri pursuing Electrical Engineering and has great interest in writing and research. He wants to share his experience with more people and also, learn from them.
Previous article
All New Featured 2020 VW Golf 8
Next article
Go Green for Pixar Motorama as it becomes Moto Expo