Mercedes AMG CLA 45S 2020: The most powerful production 4-cylinder ever

The bells are ringing for Merc fans as the company officially launched a powerful but compact car.

Yes you heard it right, Mercedes AMG CLA 45S 2020, a successor to its 35 series coupe is more powerful than ever as at the heart, is a 4-cylinder inline engine which is the most powerful to be ever produced or fit in a compact car. 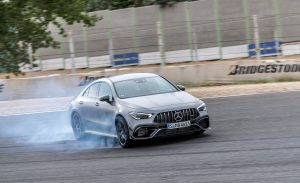 The front is a low-flat but sport looking with the “Panamerica grill” that adds up to its killer elite looks. The lines have been designed perfectly. The elegant but killer exterior is cherry to the cake, 45 S has a greater track width easily noticed from the front that gives it the quick steering responses and better stability. Inside the cabin, the sporty seats are designed to be gripped in, along comes the traditional AMG centre console. The steering wheel has burst of switches and buttons.

This sprinter has a 2.0-litre turbocharged 4- cylinder inline engine, which is claimed to be the most powerful compact engine ever. The vehicle is quick to engage from a standstill and easily goes from 0-100 km/h in just 4 seconds. The powerpack delivers 421 Hp of raw power and 500 Nm torque which just makes the beauty goes sideways like no other. The engine has been 180- degrees rotated, front-mounted with direct fuel injection. The small engine doesn’t stop it from power sliding on the race tracks, also the CLA has a top speed of 250 km/h.

Other than the increased track width, the coupe has latest technology to add up with. A 10.25-inch Digital Instrument cluster and a 10.25-inch MBUX Infotainment system make it futuristic. The transmission has been upgraded to an 8-speed manual transmission which makes it a rapid-fire shifter. The smooth suspension system ensures a smoother ride on those bumpy roads and quick turns, All in it is engineered to make its competitor shy.